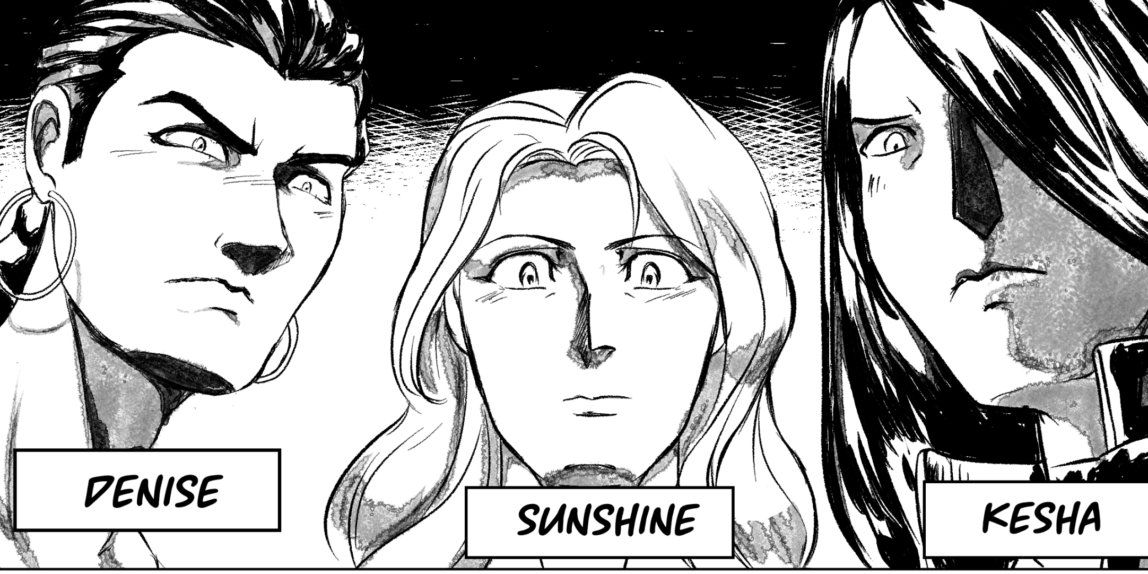 Yours truly was recently interviewed with Michael Haberfelner of (re)Search My Trash.  We talked many things AXEMAN – especially the upcoming one-off comic featuring Cutter’s Creeks’ axe-wielding local legend.  Read the interview below.  Enjoy!

You’ve only recently announced the release of your comic book Satan’s Whores: An Axeman At Cutter’s Creek Story – so in a nutshell, what’s this one about? And how does it tie in with the Axeman trilogy of films?

Satan’s Whores picks up only moments after Axeman 2: Overkill ends. Kesha has survived her run-in with Deputy Darlene and Sunshine has survived her encounter with the titular character. We then get thrust into a subplot that reveals a previously undisclosed relationship between Kesha and Sunshine that was hinted at in Axeman 2: Overkill. And it’s a relationship that also has a connection to Denise, played by Tiffany Shepis [Tiffany Shepis interview – click here] in the original Axeman.

What were your sources of inspiration when writing Satan’s Whores: An Axeman At Cutter’s Creek Story?

Funny enough, I drew from Quentin Tarantino’s Reservoir Dogs. It has a bit of that feel – if all the major players were ruthless, cut-throat women and thrown in the middle of a graphic slasher film. I wanted to give their story a style of its own while keeping it in the vein of the Axeman canon, i.e. funny when it’s supposed to be funny and scary when it’s supposed to be scary, and chock full of 80’s awesomeness.

I would’ve never described myself as a comic book guy. But my best friend is and he’s always told me that I should give the medium a chance. I just never had the right story. I was actually planning on making this story a short companion film for Axeman 3: Absolution when I struck up a conversation with my graphic artist about his thoughts on the story. He read it and said, “Dude, this would make a great comic book.” So we sat down and went to work. It wasn’t until I saw the first page that I realized just how incredible this was going to be. And I started to see that Axeman and its sequels could have all worked as comics and probably more so. With film, your vision can be hampered by shooting conditions, budgets, equipment, time… But with this medium, your only limitation is your creativity.

What can you tell us about the artist you’re working with on Satan’s Whores: An Axeman At Cutter’s Creek Story, and what’s your collaboration like? And how much say do you have when it comes to the look and style of the comic?

The artist is Carlos Montenegro. And the guy has an incredible eye and the skill to pull off the look, style and tone I was going for. With it being my first comic, I truly have no idea what is “normal” for him, haha, but he has been awesome in doing whatever is necessary to help me achieve my vision. I started with writing the script and determining a page count. Then we sat down and came up with the visual style and how each page would be laid out. It was a blast getting so much detail into each frame. Just an incredible experience to watch a story come to life the way it was intended without have to constantly sacrifice or compromise. It’s was true artistic freedom.

How does conceiving a comic book actually compare to making a movie?

It starts off roughly the same but takes a sharp turn. Both start with the story. Without a compelling story and strong characters, you’ve got nothing. After that, you spend a fair amount of time discovering its tone, developing its style and how you want the audience to experience it. And there’s storyboarding in both mediums but I think that’s where the similarities end for the most part. Yes, both focus on what you can see and hear but films require collaborations from so many different departments who all have their interpretation of your interpretation of the screenplay. With this comic, it’s just me and my artist, and it’s him getting on paper what I see in my mind. That’s it. There’s no other collaborators. He always puts his special sauce on it, but for the most part it’s what I’ve written and expressed.

The $64 question of course, when and where will Satan’s Whores: An Axeman At Cutter’s Creek Storybe released?

We don’t have an exact date yet but special edition physical copies will be available for pre-order in late September. Full release will follow some time in October closer to Halloween.

Based on your work on Satan’s Whores: An Axeman At Cutter’s Creek Story, can you ever again be tempted to make another comic book, within the Axeman universe or without?

Most definitely. Depending on how well received this entry is, we’ve already discussed doing a spin-off series of comics that parallel the films. Possibly even retelling the films the way they were originally intended through the comics. Though I’m very appreciative of the love the films have received, there’s so much of the story that’s been compromised or left on the cutting room floor all-together that I feel the comics could better explore, and that fans would really love. So, yes, a million times over – I am more than tempted to make another comic book!

Currently knee-deep in the first novel in the same Axeman canon. It takes audiences back to 1983 and explores the origins of the tri-city area of Cutter’s Creek, Hunter’s Ridge and Cordova Peak, and the murder that tore the towns apart. It’s all told from the perspective of then-Sheriff Marion Whitfield, who is actually the protagonist this time around. The novel is currently titled Break the World: An Axeman At Cutter’s Creek Story.

Anything else you’re dying to mention and I have merely forgotten to ask?

Just that I am very grateful for your continued support of my work. And very appreciative of all the love I receive from Axeman fans and family. It’s why I get to do what I do.

Thanks for the interview!